“My name is Charles Saatchi and I am an Artoholic” a paper back I bought to read about this reclusive man responses to battery of questions.

I bought it as I was curious in what way Saatchi will put his mind up in front of the public finally and was interested to see his mind in its own genuinely, with no disguise hopefully.  I spend 45 mins to read the book on my ride from Taipei Airport to the city with a 10 mins phone calls intermission.

No glossy design but a functional paperback with a Q&A session.  Take out the enlarged pull-quotes, the few photos/illustrations,  it might just fill a few pages features in a lifestyle magazine, while I found few question and answer quite interesting read.   It is basically 90% packaging.   Almost like those truffle foam in french gastronomy, looks nice; tastes alright; but leaves you with emptiness. 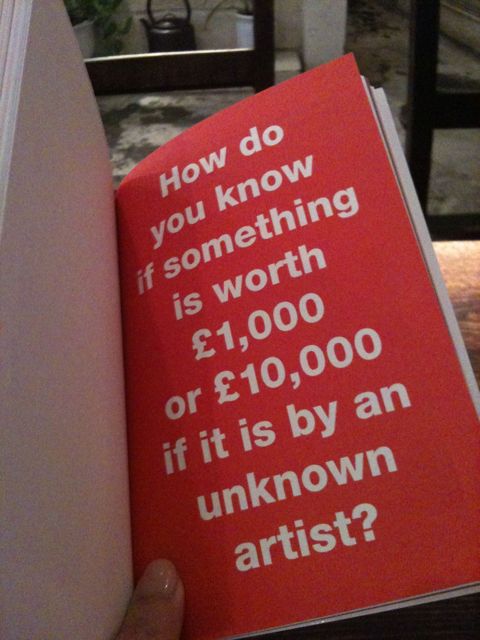 Limiting himself to a straight Q and A is truly a subway read, also, I guess, it means he doesn’t have to reveal anything he doesn’t want to. And to choose the question and answer to be placed in the book itself, in whatever style he fancies, always seeming quick and clever.   However, a smart but coward format I think.  Almost like reducing hope and ideas, believes and thinking into an ad man’s one -liner.

Q: Do you wash your hands after you have had a wee?
A: I have an acute sense of hygiene so I wash my hands before I have a wee…

while question like this is giving chance for Charles to address his persona with manipulation:

Q: Why don’t you attend your own openings?
A: I don’t go to other people’s openings, so I extend the same courtesy to my own.

and constant play down of his achievement and himself which doesn’t seems to be his “showing off” charisma for years:

Q: Do you believe in it all?
A: I am not clever enough to be a cynic, so belief is the only options available to me.

What is missing in the book to me is why Saatchi likes what he likes or buys what he buys. Turning peanuts into a Wagyu steak!  Well, a secret or an unanswered question that is intentionally being omitted for further anticipation?

Founder of Saatchi & Saatchi, Charles Saatchi has vigorously shaped the contemporary art scene and discovered artists who went on to become rock stars like Damien Hirst, Jeff Koons, Cindy Sherman, Chapman Brothers, Sarah Lucas and Marc Quinn.  Those we believe we love.  Given all his success and being the most influential art collector of our time, the book is definitely disappointing.

Saatchi definitely deserves better than to have himself writing about himself and discloses how fascinating and mysterious this man’s mind is for real if he is not comfy to do so himself, you think?